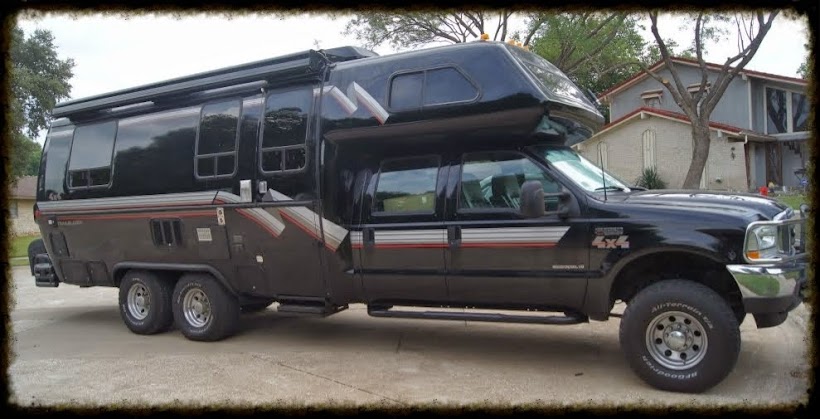 The Beast has Arrived 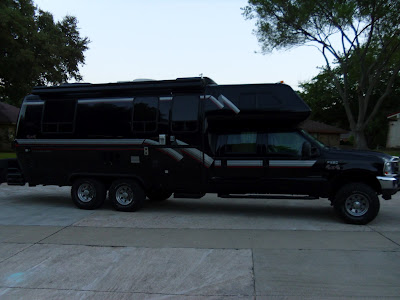 And a perspective shot, next to my 20 foot long Avalanche, think I waited a bit too late in the day to take the pictures, will post new ones soon. 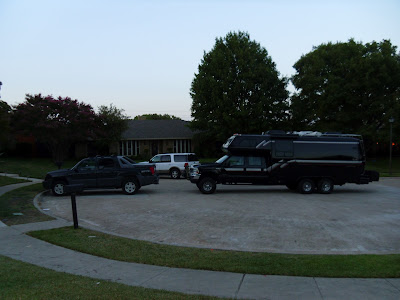 This is one of the Rarest of RV's, one that I've been trying to find for a few months now.  I had all but given up on finding this model of Revcon when a bit of persistence paid off.  This Beast gets what I'm told is @15mpg, I was too tired with learning to drive it and staying awake to pay much attention to the mpg, so I will test it out over the coming weeks. To top off the rare factor of a Revcon 4x4, it's even rarer to find a Diesel one.  It may be a true one-of-a-kind.

So Monday night I flew out to Illinois and after checking out the Beast in person, I plopped down the cash and signed the title, added it to my insurance and hit the road.  The seller was nice enough to give me a Tom-Tom GPS, which I quickly found to be next to useless except for showing my MPH.  I turned to my Iphone 4 Google Maps, and used it all the way home with nice clear cut directions and following my little blue dot. About 220 miles into my trip I pulled into a gas station to fill-er-up, as the reserve tank was empty (was empty to start) and the main tank was at a quarter full.  56 gallons of Diesel later I was back on the road (Swiping my credit card 3 times in the process, $206 dollars or so).  Around the 330 mile mark I was out of gas, so I pulled into a Rest Area and parked behind a Class A Motor home.  I gotta say, the Revcon was about the same Length, but it sure looked a hell of a lot cooler than the rectangle unit.

I had a nice nights rest at the Welcome to Missouri Rest Area (which by the way is one of the cleanest I've seen) in the King Size bed that is over the cab.  After a delicious dinner of 2 Deli-fresh (uh huh) sandwiches from the gas station mentioned above, I fell asleep a bit after midnight to the peaceful sound of the 18 Wheeler diesel engines about 30 feet away ticking away the night.  Or at least I finally passed out after about 2 hours of listening to that sound anyhow.

Got up around 6:20am. Treated myself to a delicious hot black coffee from the vending machine at the rest area, grabbed a bottle of colored/flavored water(Power-aid or something) and hit the road.  Saw a few cool sights along the way, but with near 500 miles to cover Tuesday, I didn't stop to admire them.  The St. Louis Arch was pretty cool, I went right by it on I-44 on the worlds crappiest paved bridge in the world.  The pictures and TV don't do it justice, it was HUGE.  So I will do it justice by not showing you the pictures I didn't take of it as I bounced by(again, horribly paved road, I imagine just to make it impossible to take a picture as you drive past.)

I believe I finally pulled into Plano a bit after 2pm.  My Odometer was only showing around 730 miles covered but I did discover something was up with the Speedometer as I drove.  When it was showing 65mph, GPS was showing 70.  So, that's about 7.5% difference or so. Meaning I had covered the 780 miles or so in which the directions showed, my odometer is just a little off because of the variance.  I guess the monster tires never got synced to the speedometer correctly.  65mph on the speedometer was really the top cruising speed for it anyhow.

Today I spent a good portion of my day getting it inspected, the title swapped over, and giving it a quick bath.  Cool fact about the Texas State Inspection for a Diesel: it was only 15 bucks instead of the 40 for a gas powered vehicle.  Apparently they don't have to use their emissions equipment on Diesels.  The guy who did the inspection had never seen one like it, to which I told him he never would except mine every year when he re-inspects it.  It definitely gets attention.  Even the mailman stopped my wife to ask her about it.

For such a big rig, all 32 feet of it, it actually handles pretty much like a large truck.  Has a handy video camera on the back so I can see everything behind in a 180 degree field of view for a good 20 yards or so.  I got put through the ringer on the drive as I went thru at least 50 different construction areas with narrow lanes, single lanes filled with cones, no shoulders, and the concrete barriers and I didn't bump a single one.  And there were some serious hills to climb as well.  The Chinook will beat it in a race any day of the week, but for the slow and steady race, the Revcon wins.  Plus it holds about double the fuel and gets better mileage(in theory)

Next on the list of to-do's is to go thru it and take inventory (the guy left everything in it, pots, pans, the works).  Also the marine deep cycle battery needs to be replaced, it holds a charge for about 30 minutes with barely anything drawing on it.  Gonna have to beg my electrician neighbor to work thru it as well, I believe it has some minor electrical issues going on that are constantly draining power.  It apparently doesn't have the feature that the Chinook has that protects the main engine batteries from getting draining by the Cabin area, so something else to look into.  Already had a boneheaded moment last night when I tried to crank it up about 5 hours after I arrived to find the main batteries drained.  I may have left something on that drained it, or it could be a mysterious power drain.  Either way it spent last night on a trickle charger and so far today has been fine, though I did turn off the main cabin breakers and the master kill switch.

I'll go thru the features of it over the coming days, some will surprise ya!